Village Chitkul is the last and highest village in the Baspa valley in district Kinnaur. It is situated on the right bank of Baspa river Chitkul is the last inhabited village near the Indo-Tibet border. The Indian road ends here. During winters, the place mostly remains covered with the snow and the inhabitants move to lower regions of Himachal. Chitkul is well know for growing Potatoes, they are one of the best in the world and are very costly. Chitkul, on the banks of Baspa River, is the first village of the Baspa Valley and the last village on the old Hindustan-Tibet trade route. It is also the last point in India one can travel to without a permit. Of particular interest at Chitkul are its houses with either slate or wooden plank roofs, a Buddhist temple and a small tower. However, there has been an increased use of tin-roofs, especially the high school and the army/ITBP barracks. Chitkul is practically the last point of the famous Kinner Kailash Parikrama as one can hitch a hike from here onwards. After one crosses over the 5,242 m high Charang Pass, it is a long and steep run down through slithery scree slopes to Chitkul(3,450m). The powerful goddess of Chitkul is the only non-Buddhist deity to which respect must be paid by the Parikrama pilgrims. This is the last Indian village on border with China. The road doesn't take you till the actual border, it closes around 90 km before it and then rest of the area is under the control of Indian Paramilitary force ITBP. There are wooden houses turned into hotels that can be found in Chitkul, these hotels are a bit expensive and most of the tourist prefer to stay at Sangla and make a day trip to this place. The views from Chitkul are awesome. The river Baspa is far below down from this valley and it will take atlas 1 hr to 1 hr 30 mins walking to reach the river from where the Chitkul hotels and homestays are. Sangla is close to Chitkul and hotels and camps provide very good arrangement for living and are comparatively cheaper. While in Chitkul make sure you carry adequate cash and petrol or diesel for your car as there is no ATM facility or fuel stations in this hilly area. There is also neither a clinic nor any hospital in this area and one has to travel back to Sangla for emergencies. The village abounds in typical Himachali architectural cottages of slate or wooden roofs. The Kagyupa temple has special significance because it houses a rare image of Shakyamuni Buddha with four directional kinds placed on every side. They say that the presiding deity of the village, Mathi is very alive and must be paid homage to. It falls directly on the Kinner Kailash parikrama route. 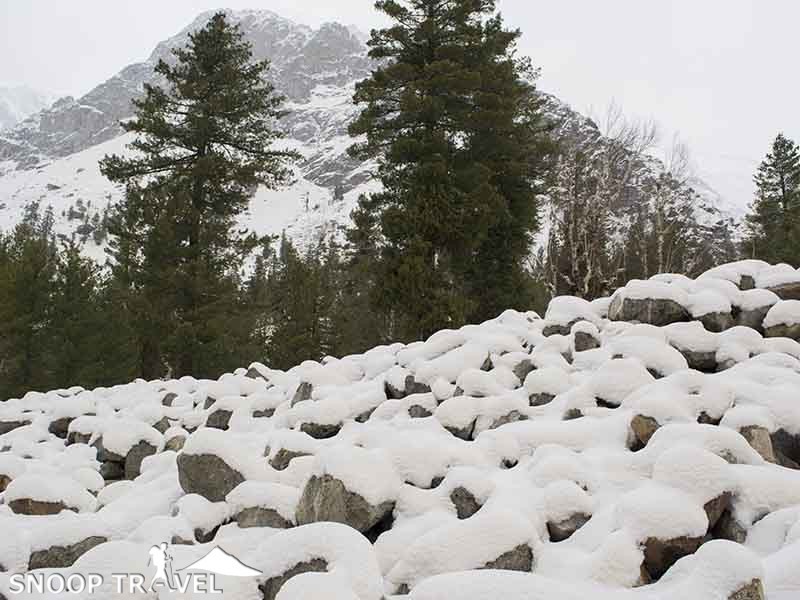 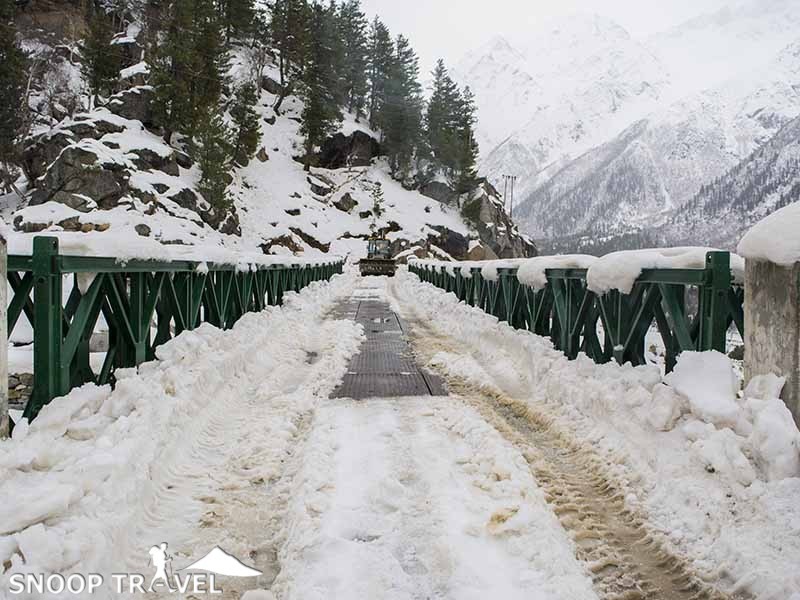 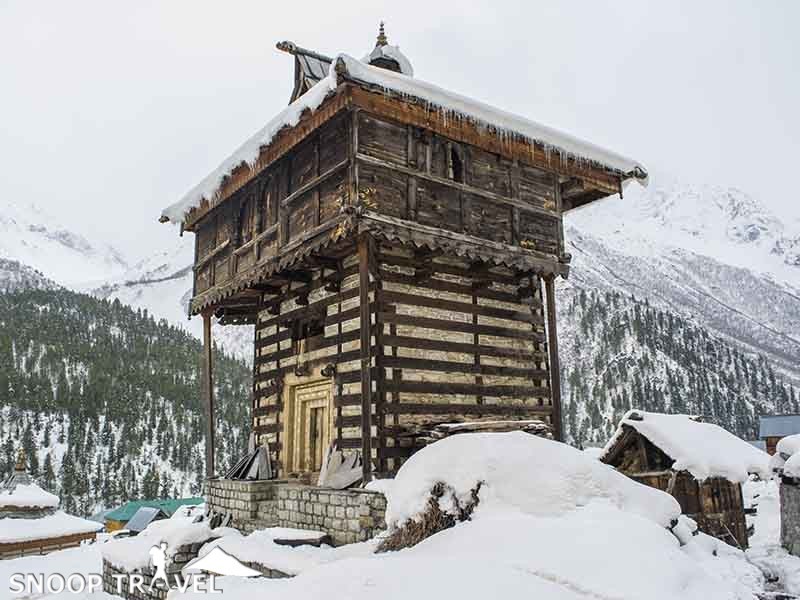 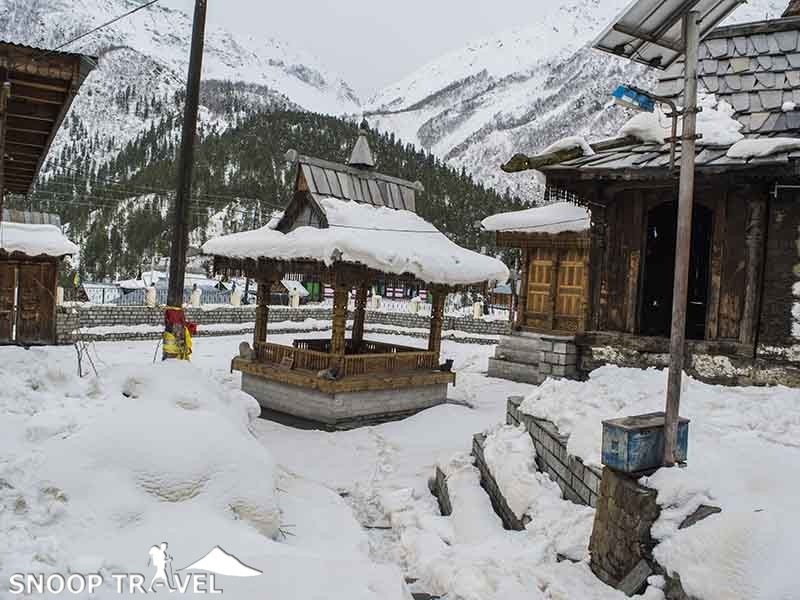 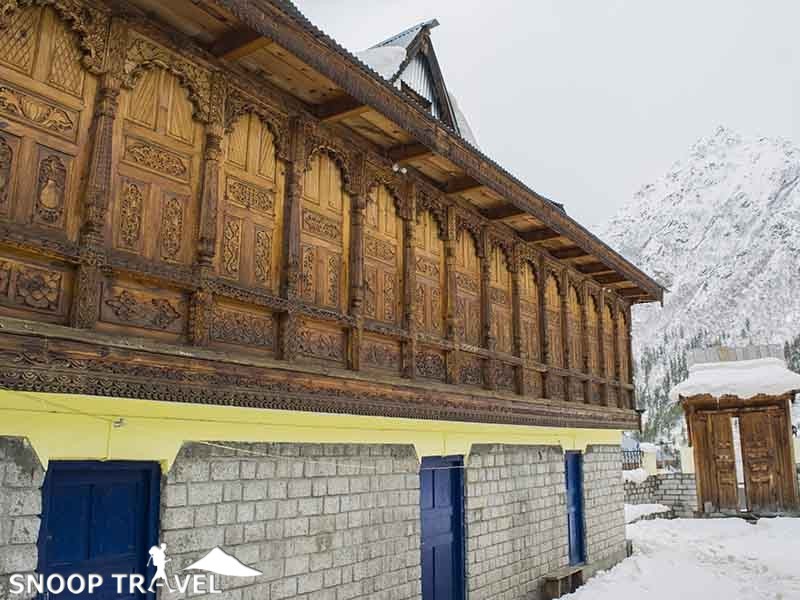 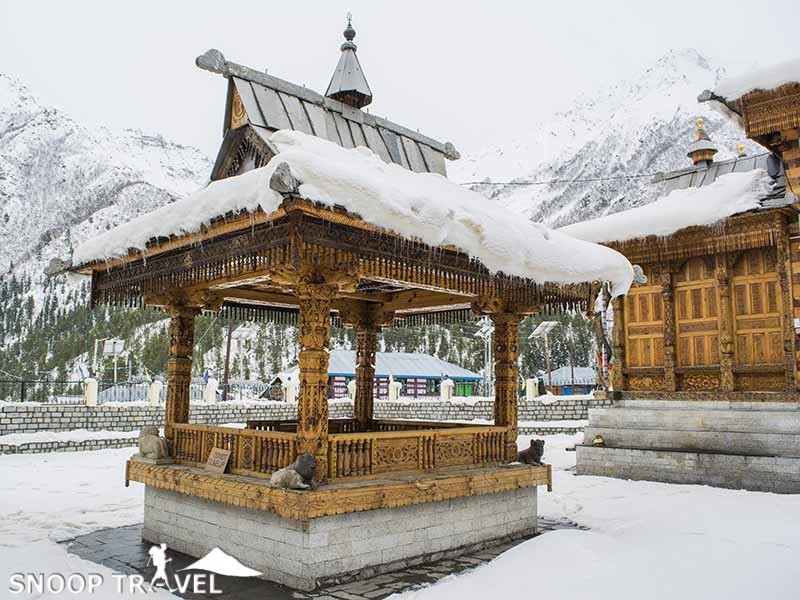 Chitkul is very cold and windy and the road normally closes down around November after the first snowfall. Tourist stay at Sangla and go for half day trip to Chitkul. It will take one hour to reach Chitkul from Sangla and you can plan for one or two hour stay there and return. So, if you are starting at 9 AM from Sangla, then you can return before 2 PM to Sangla. Now there are hotels and guest houses available at Chitkul also to stay. Chitkul can only be visited during months from May to October, during winters the roads get blocked dew to thick snow. The inhabitants of Chitkul and other villages move to lower regions of Himachal during this period. Special Inner Line Permit needs to be taken if one wants to travel beyond Chitkul towards Indo-Tibet border. Not long ago, such permit was required to enter Sangla valley as well due to it being close to the Indo-Tibet border.

How to reach Chitkul Himachal Pradesh

Chitkul is around 569 km from the New Delhi and 24 km from Sangla. Landslides are very common in snowfall time around Chitkul and heavy rains also impacts the roads easily. Its very common for tourists to get stuck here for couple of days so the best way to handle these situation I think is the stay put when the weather is bad and only travel on roads when it clears up. The roads are usually cleared by the military fast but the turn around time may differ. This is a 1 day trip from sangla to chitkul,the last inhabited area in Indo-china border and the wise man tells us not to worry about the high altitude respiratory glitches but advises to leave before 3 pm because sudden drop in temperature is very likely.You get bus and numerous vehicles from sangla with apple orchards in flower along the road and also patches of snow on a rather narrow and difficult road. There are HRTC buses from Sangla to Chitkul on regular interval. Those buses will back to Sangla after 30 Minutes halt at Chitkul. Last bus to Sangla is around 3:30 PM .